Dr Mark Little, Angela Jackson and John Piispanen (JP) have been to Papua New Guinea (PNG) three times since 2020 to assist with the COVID-19 response. The first deployment was August 2020, followed by March 2021 and most recently October 2021.

Each deployment to PNG has been busy, challenging and rewarding in different ways. We’ve worked alongside amazing people and have been blessed to have made long term friends. We are just one part of a large team of professionals who have worked both in Australia and PNG to help with the COVID-19 response.

In October 2021, PNG suffered a third surge in COVID-19 cases across the Highlands region, which led the World Health Organisation and the Government of Papua New Guinea to put out a global call for Emergency Medical Teams for assistance.

We were deployed as an AUSMAT forward assessment team along with a senior DFAT member, a representative from Emergency Management Australia (EMA) and two logisticians from Palladium. Our objectives were to provide the following: 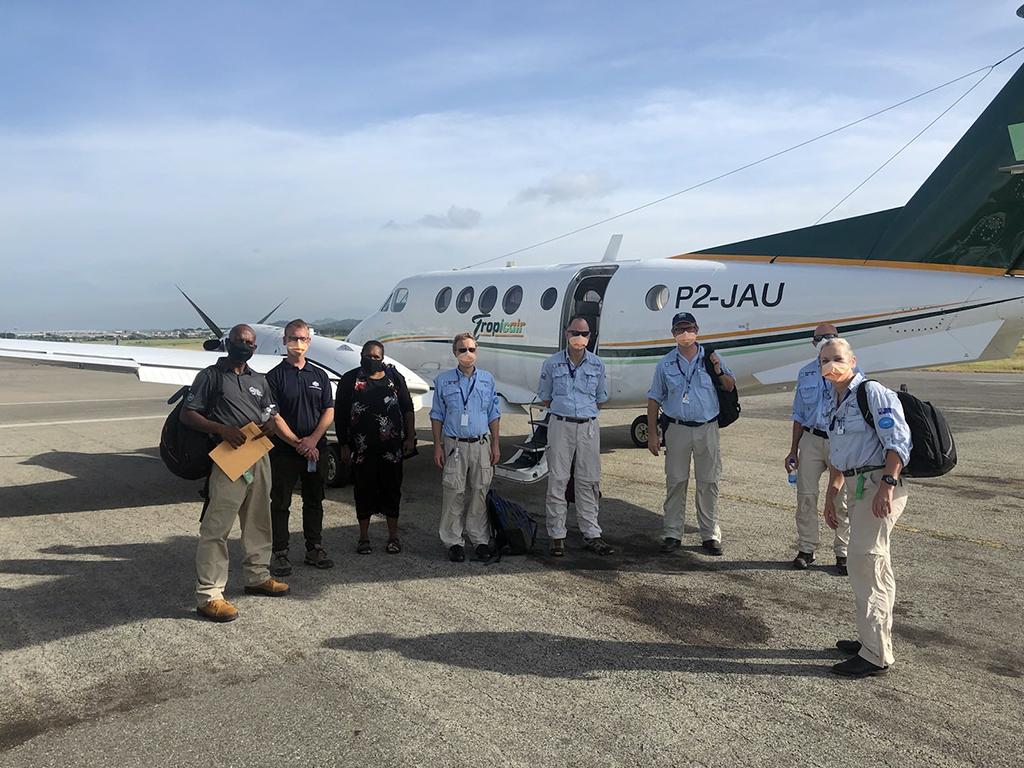 Ms Jackson and her sub-group of AUSMAT personnel prepare to visit the Highland regions of PNG. 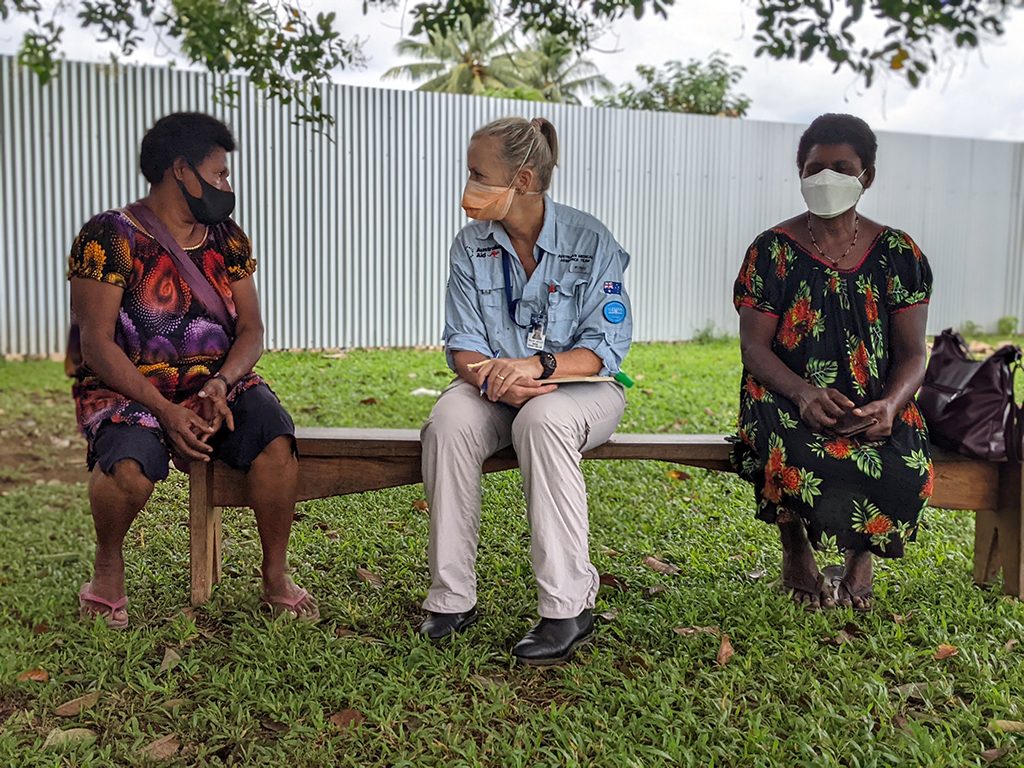 Ms Jackson engaging with local community while on deployment in PNG in October 2021.

As we have been to PNG a few times, we had made many friends working in the National Coordination Centre (NCC), Port Moresby General Hospital and the Australian High Commission.  In many ways, this made our task easier because we understood the context and the challenges and there was already an established relationship of trust.

In our first situational report, we highlighted to following observation from the ground:

PNG reported a surge in COVID 19 positivity rates and increased demand on the health sector. Our early impression is that this is a more significant caseload than when AUSMAT were here earlier this year and is placing widespread strain on health facilities throughout the country.

Services were certainly stretched in many parts of the country. Port Moresby General Hospital laboratory was reporting PCR positivity rates of 82% on testing symptomatic patients.  Rapid test positivity rates amongst opportunistic swabbing of asymptomatic visitors and guardians in the hospital was around 14% indicating high levels of community transmission.

As with any disaster, there were different ideas about what would be of greatest benefit for the people of PNG. Discussion included the need for a field hospital, flying in additional surge support, increasing vaccination rates and critical supplies.

Our recommendation was to deploy additional AUSMAT members to assist.  Subsequently, a Bravo Team consisting of five members were deployed to augment the Alpha Team. The combined team were then split into two main sub-groups.

In one group, Clinical Team Lead Angela Jackson and four others deployed to several provinces that were identified by AUSMAT and the NCC as high priority. The aim was to help prepare them for a likely surge in cases which we referred to as “building firebreaks”. The team visited the Eastern Highlands, East New Britain, West New Britain, Autonomous Region of Bougainville and Madang.

The remaining AUSMAT members, as well as the DFAT and Palladium logisticians, remained in Port Moresby and worked between the NCC, the warehouse and supporting Port Moresby General Hospital. The team worked to develop a strategy aiming to deliver essential supplies throughout the country.

When the forward assessment team visited Mount Hagen and Goroka in the Highlands region, the community had reported an inundation of COVID-19 cases, and an increase in hospitalisation and deaths. Port Moresby was starting to see increased cases, with hospitals under increasing pressure and staff shortages. National vaccination rates were less than 5%.

While in the Highlands, we confirmed shortages of basic, but critical, equipment required. Oxygen supply was a major issue with delays in ordering and transportation. We knew in times of COVID-19 peak, health facilities would require at least three times their usual oxygen supply.  There were also shortages of essential oxygen consumables, medications, and PPE.

We assembled key stakeholders, including the national staff and WHO clinical and logistical representatives, and put forward a concept of a critical COVID-19 response bundle that we referred to as a ‘brick’. We were focused on changing the mindset of the NCC/WHO logistical team to deliver a ‘push’ model to provinces starting to surge rather than waiting for them to request support. Over the next few days, we worked on quantities of PPE, essential medications, oxygen concentrators and other consumables that could be packed and pre-positioned to the provinces that had not yet peaked, Operation Halivum Wantok (helping friends), named by JP, was established.

Everyone worked through the logistics of procuring, packing, and delivering the ‘bricks’ to key provinces that were identified due to a current or predicted surge in cases. Many people helped turn the concept into a reality, including local national staff, DFAT, Palladium, Australian High Commission in PNG and the Australian Defence Force (ADF).

Operation Halivum Wantok was successful in delivering COVID-19 ‘bricks’ to 15 provinces in PNG.  JP liaised with key personnel in each province to ensure the ‘brick’ would be collected from the airfields. The ADF helped with the packing, and a Royal Australian Air Force C130 then moved these ‘bricks’ to the provinces (with JP, and other team members flying along). Overall, 40 tonnes of equipment was moved, and JP reported all provinces were incredibly grateful.

Since this PNG deployment, AUSMAT has gone on to use the ‘bricks’ concept refining it to suit local context in the Asia Pacific region , with DFAT and Palladium looking at having pre-packed ‘bricks’ and prepared for future deployments.

Relationships and friendships have strengthened as a result of AUSMATs continued support in PNG.

We would like to acknowledge the hard work and support AUSMAT received both in PNG and in Australia. Such a response relies on a large team of individuals, and we extend our sincere appreciation to all who contributed to this and other missions.

We would also like to extend our sincere gratitude to the local staff we worked alongside and our thoughts and best wishes to them and their families in these challenging times. 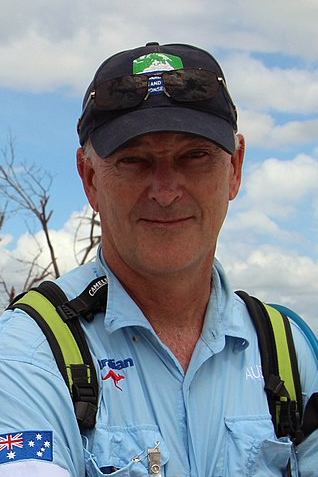 Mark is an emergency physician & clinical toxicologist working in Cairns. He has deployed to Nias for AusAID, Yogyakarta, Pakistan, Christchurch, Philippines, Bangladesh, Samoa, Papua New Guinea and the UAE with AUSMAT. He had been AUSMAT Clinical Team Lead on a number of missions. He also responded to the Ashmore Reef incident and evacuation of Cairns Hospital. 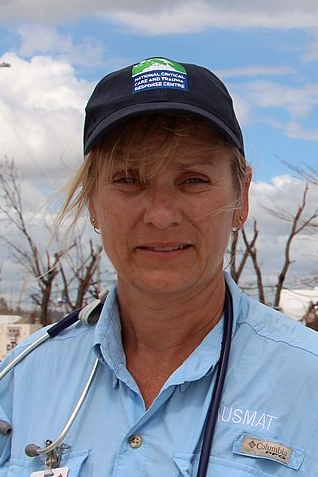 Angie is an emergency nurse practitioner and midwife with post graduate qualifications in critical care, public health and tropical medicine, humanitarian assistance and law. She works in the emergency department at Cairns Hospital and also works as a flight nurse for the Royal Flying Doctor Service on a casual basis. She is an active Air Force reserve nurse. Angie has been extensively involved in Australian Medical Assistance Teams (AUSMAT) since their inception. She has been deployed both nationally and internationally to assist in humanitarian crises on a number of occasions including, Nias, Yogyakarta, Pakistan, Christchurch, Philippines, Papua New Guinea. She was seconded to the World Health Organisation where she worked as EMT coordinator and Case Manager for the Rohingya refugee crisis in Bangladesh. 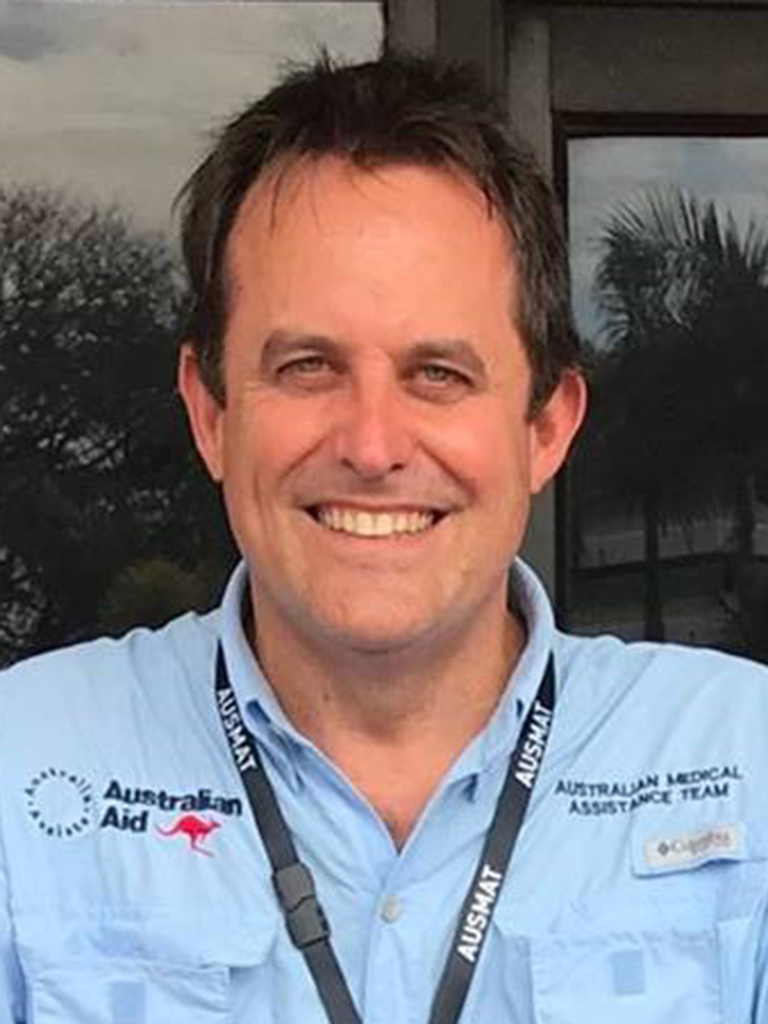 John Piispanen is an environmental health officer and Executive Director of the Health Protection Branch of Queensland Health. Prior to that, the Director of the Metro North Public Health Unit and has worked with Queensland Health for over 37 years. He has post graduate qualifications and training in public health, humanitarian health response, emergency medical team coordination, security and risk assessment and has an Adjunct appointment as Associate Professor with the University of Queensland. He has been the Queensland Public Health Incident Controller and Site Commander for numerous emergencies including Cyclones Larry, Yasi and Ului, the Bundaberg Flood Event, several South East Queensland Flood Events and the 2009 Dengue outbreak in north Queensland. He has undertaken numerous missions overseas including the Solomon Islands and the Ebola response in West Africa. He has deployed with AUSMAT to Timor Leste, Philippines (INSARAG) and contributed to the COVID-19 response in Papua New Guinea.
Back to News