Do you know Wolverine: A recount of an adventure on the Gibb River Road

The last two years have gone in a very blurry maelstrom, yet my last travel seems eons ago. I am sure many of you, like me, receive, once in a while, your personal social media digital mementos of things past. Some of these – for all their otherwise beauty and corresponding ‘Awwww!’ moments – trigger painful openings of squeaky cobwebbed memory drawers. Post-Awwww! the logical rhetoric query would be “Will I ever be able to do it again?”.  Thinking of the good times had, the 2019 Gibb River Road – Tanami Track journey would be the one to put on the cards. The good thing about adventure motorcycling is that no mask is required. What 2022 and beyond will be is down to anyone’s expert use of crystal balls, tea leaf divination, knuckle bone reading or similar adjuncts. What some of 2019 was, for four of us, is recounted in the next few words and images.

There is a lot of helmet time while riding you’re on a motorcycle tour with three mates across the Gibb River Road to reach the Tanami desert, and then continue through to Adelaide via Alice Springs and Coober Pedy. ‘Do you know Wolverine?’ my right hemisphere asks the left one. ‘Yes?’ the other side of my brain answers tentatively. ‘Good! So, you know that his superpower is self-healing?’

Six hours of its continuous rattling within the brain box on corrugations had started to take its toll on the general working status of my internal monologue. Momentarily this captivating discussion is cut short by a moderately deep bull dust hole in which I find myself and my fully laden trusted steed (2015 BMW GS 1200 liquid cooled with a moderate amount of bling, but also a full 4 days’ supply of water, fuel, camping gear, spares and tools, recovery gear, comms – sat phone, UHF radio, GPS, Spot tracker Gen 3 – and three-weeks’ worth of other equipment to make life sustainable until the final destination is reached). 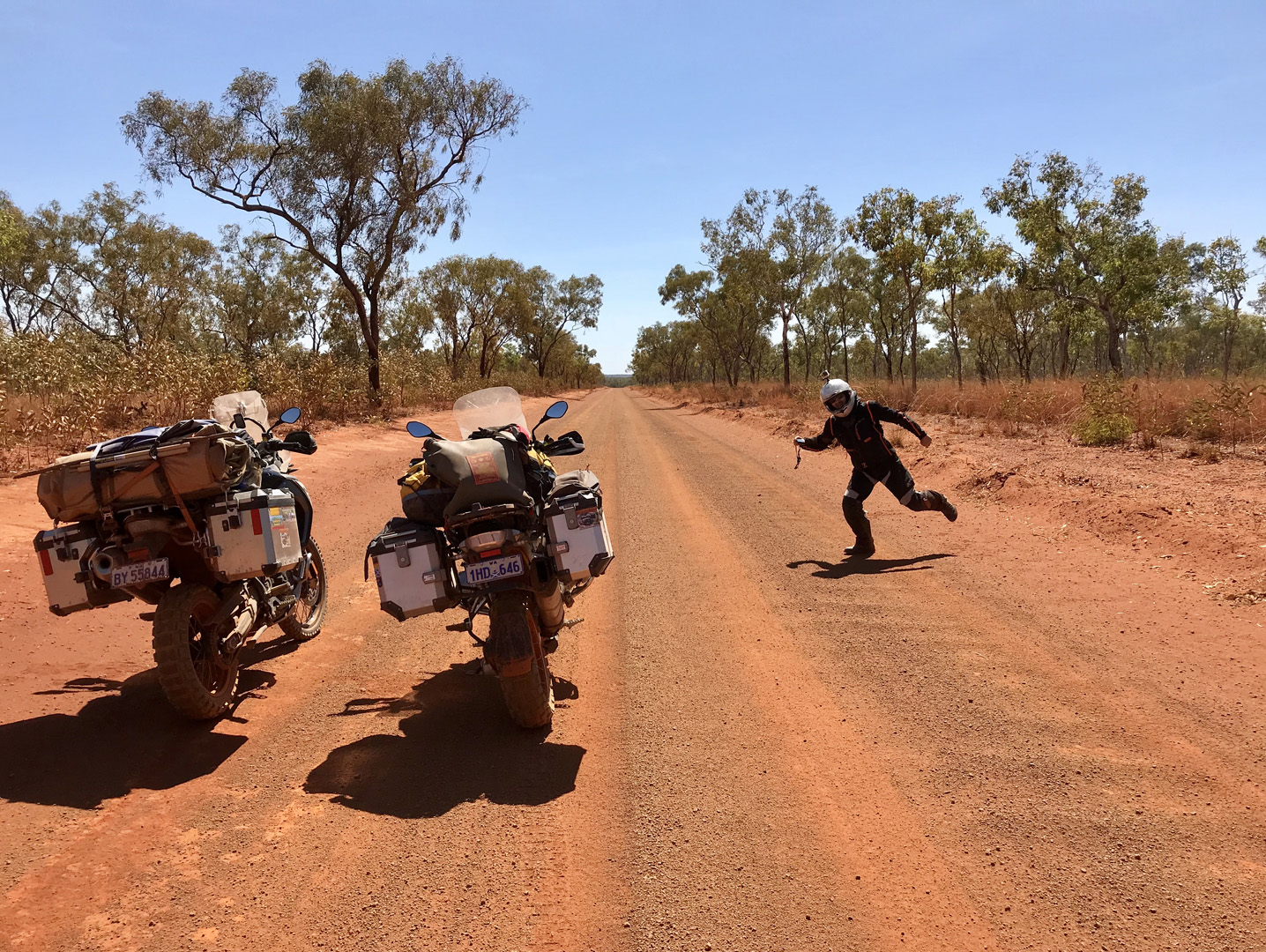 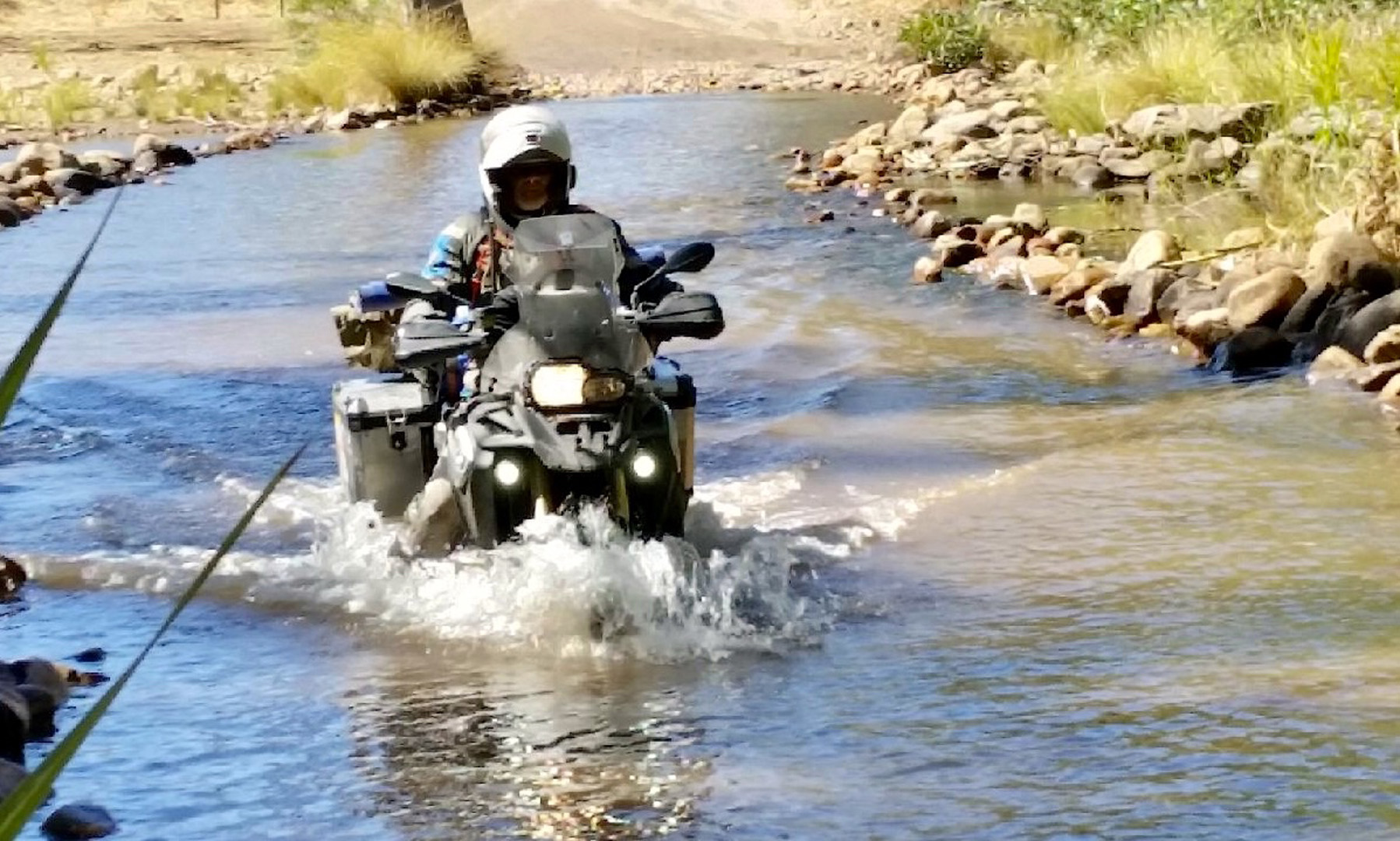 King Leopold Ranges’ Mount Barnett Roadhouse came into view, a welcome sight with the prospect of a good meal, the gurgling sound of fuel flowing into the tank… the little things that make a good end to a day’s ride. Colin, Werner and then Mark pull in behind me. Somewhere behind their red-dusted faces there’s a grin only stopped by their ears. We pay our camping fee, refuel, replenish our water tanks, buy the obligatory sticker and get ready for the last seven kilometres to the camp site.

I see Mark coming out of the shop with a long piece of wire and him doing something to his bike’s front fork-handlebar assembly. We all gather around him. The welding has gave up the ghost. Normally not a huge issue, but the bush repair would need to resist what was still to come, over the next almost thee-weeks and 2000 km of track. I am sure all of us had our own thoughts on the matter but too tired and worn down after the day’s ride we decided to set up camp first, then assess further.

The next seven kilometres proved to be a very tortuous bush trail, the kind you cannot keep a line of sight to your buddy in front or at the back, but not too narrow, not too wide, mostly sand. Colin and I make it to the camp, dismount and start setting up. Werner arrives after five or so minutes. We wait for Mark… another five minutes, another 10, 15… We start to get worried.

A truck enters the campsite and drives towards us, “Are you waiting on another guy? He has fallen on the track and cannot get up”. Immediately, we grab the radio and try to make contact knowing Mark was carrying a radio also – nothing. Werner goes back to look for Mark, we stay back and await a radio report as we might have to get help from other campers. A few minutes later Werner radios back ‘Mark has fallen, he is pinned under his heavily laden bike, the bike looks rideable but is leaking fuel on him, and his foot points in a very wrong direction’.

We go to help free him and get the bike and Mark away from the puddle of fuel which now starts to form around. Even with the motocross bike boot on, the foot-ankle-shin combo does not look right, with an obvious fracture, angulation and rotation. Mark does not make a secret of it either, having heard a mighty crack as his foot got caught between the bike and ground as he fell. He doesn’t feel his boot filling with blood, which is a positive sign. Quick Airway, Breathing and Circulation (ABC) assessment is satisfactory, with his air entry and breathing being judged competent even from 10 metres away noting the flow, intensity and decibels of the cornucopia of the expletives coming out of the respiratory system. 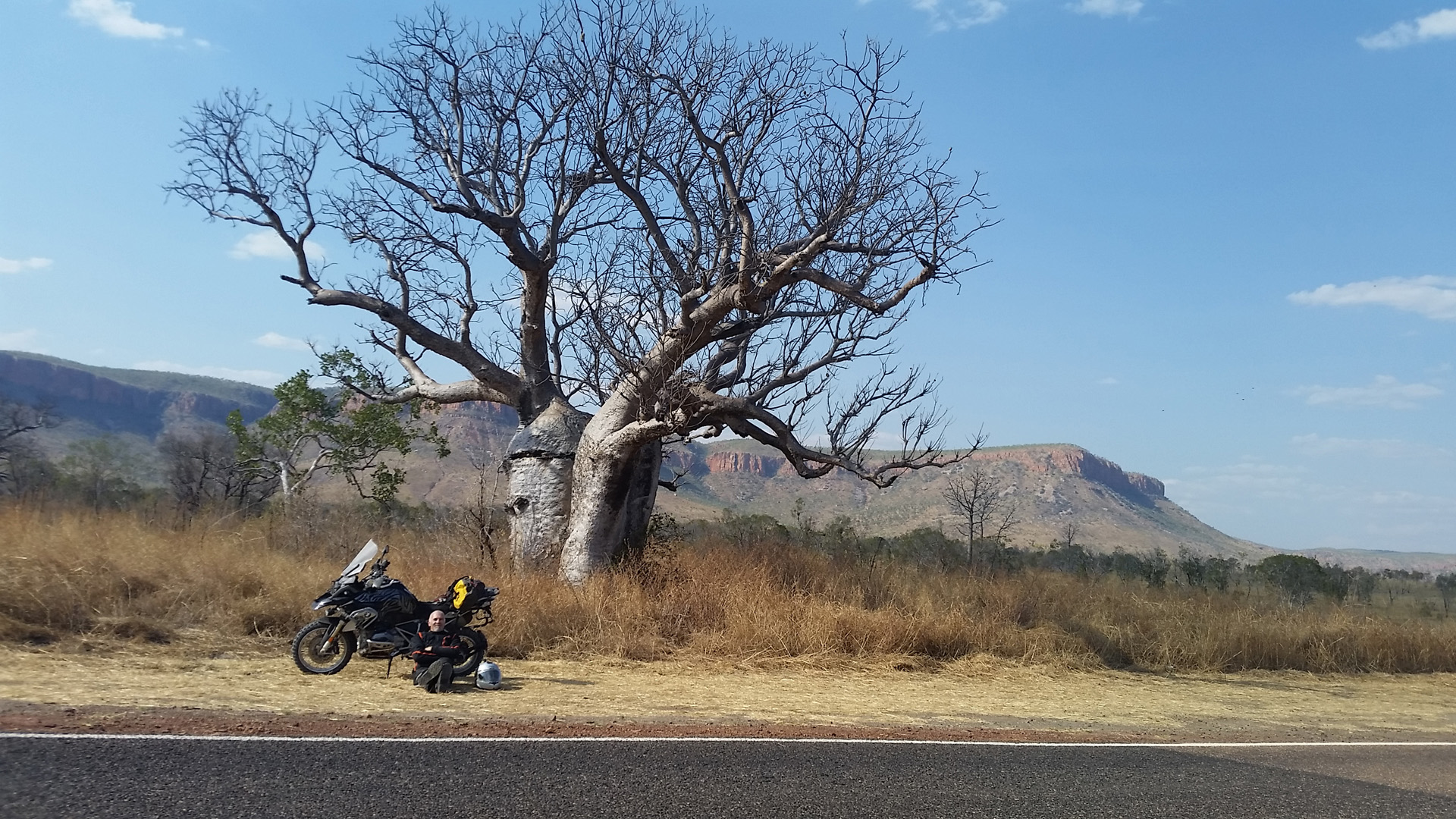 The Mount Barnett roadhouse and cattle station is owned by the Kupungarri community, and the Derby Aboriginal Health Service (DAHS) operates the nursing station within the community (approximately 100 people, 20 houses, a school, and 300 km East of Derby). We found one of the wonderful, missionary-style and long-time resident nurses.  They lent us the 4x4 Landcruiser and a stretcher to get Mark to the nursing post. We got Mark out of his fuel-soaked jacket, and supported him to the back of the Landcruiser, leg strapped and wedged between whatever sturdier and straighter bits we could find.

When we regrouped at the nursing post, we found a smiling Mark with his leg now in cast, loaded with painkillers and fluids, looking in better spirits although we knew fair well that his mind was far from being happy with the situation. His much anticipated trip finished abruptly on day one of the track after two-years of waiting and one year into the planning,.

Two hours later, close to sundown and with the Royal Flying Doctors Service (RFDS)  expected to arrive in  30 minutes, we find ourselves performing duties which we have never thought of doing. My job, for example, was to shoo cows and kangaroos off the landing strip and then light up two fires to signal where the strip was ending. The RFDS fixed-wind turbo-prop plane arrives, manoeuvres and comes to a halt some 40 metres away from us. Colin and Werner find themselves pushing the trolley from the Landcruiser through the bush with a 6ft 3” Mark hanging on for dear life.

With a deluge of last photos taken, and a long litany of farewells, good wishes for speedy recovery and promises to look after his bike and gear, the door is closed, and the plane takes off.

The next day, we go back to the crash site to re-examine Mark’s bike tracks and piece together what has happened. None of us three had made any mental note about that particular corner, the amount of sand was not something that we would have written home about, the bend was not a surprise, there was no shade, no rocks, no ruts, no stray animals. The corner might not have come as a surprise to him, but very likely the sand did, and, judging by the tracks left in sand, he tried to overcorrect, and when the rear tyre bit the newly found hard packed dirt, threw him snake-like forward.

It could have happened to any of us. Lack of heat acclimatisation and adequate hydration during strenuous and prolonged physical activities, rapid changes in circumstances, the sight of the near-by arrival goal posts, and a premature relaxation just before reaching them are all contributing to the mental and physical fatigue while riding through new, unknown environments.

After Mark’s RFDS evacuation that evening, our mood took a big dip, the usual evening banter was cut very short. The anti-climax was truly sobering and certainly dented our spirits for the rest of the day and felt for the entire trip, for this was not what we had planned, had in mind, or how it was supposed to be. Our thoughts were obviously with him and his journey to and through surgery. We decided not to ride on until sour minds were clear so that we could concentrate on the corrugations ahead.

It took two days to find the three companies that would daisy-chain transport his bike to Perth, see his bike on the trailer and wave it good-bye with the obligatory photo sent to Mark as promised proof. We left Mount Barnett and continued East.

Mark does have self-healing powers, albeit not the Wolverine-instantaneous type. But there is a deeper question - are the titanium plates and bolts warmly buttressing his tibia enough? Our collective guess is ‘no’, because ‘something’ was lost on that track, and the only way to get it back, and fully heal, is to get back up there, and finish the journey as it was always meant to be.

Note: Due to the nature of the fracture, Mark was transported initially to Derby, then Broome, and finally Perth. He was operated on a week later and has made a full recovery. All photos are published with consent. 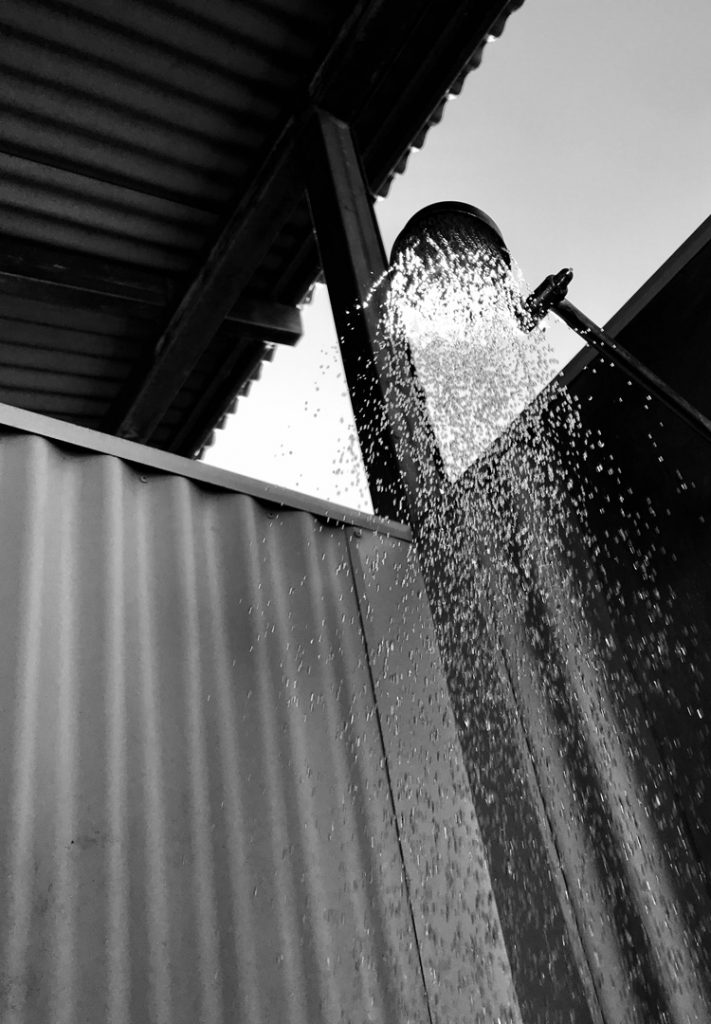 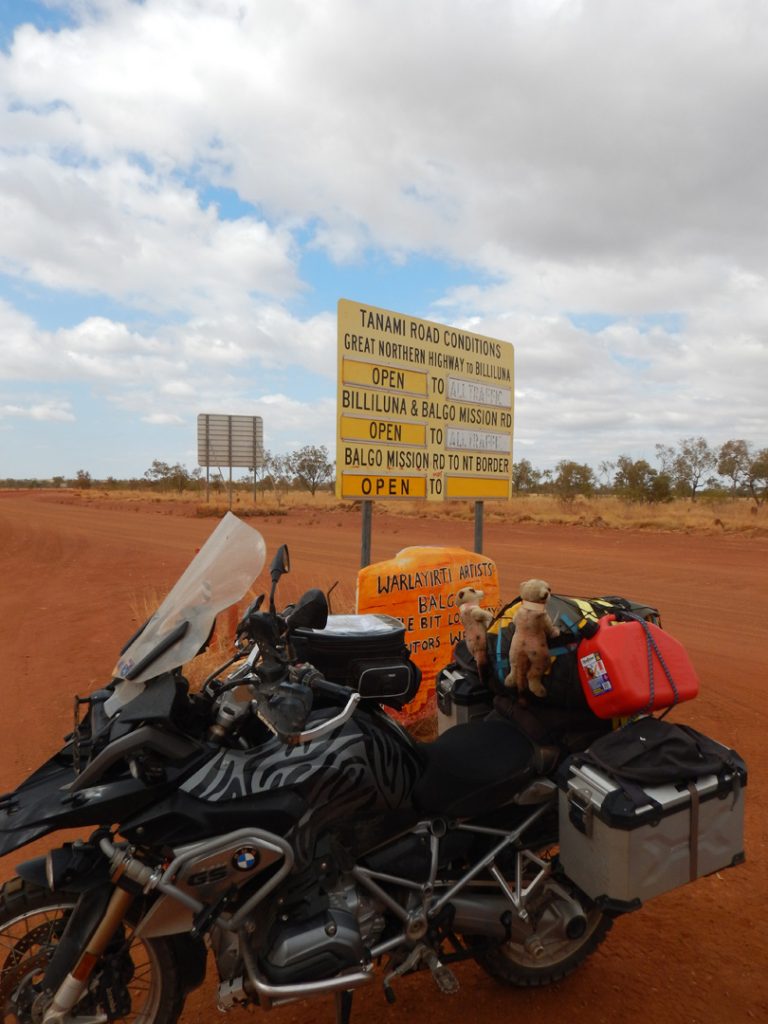 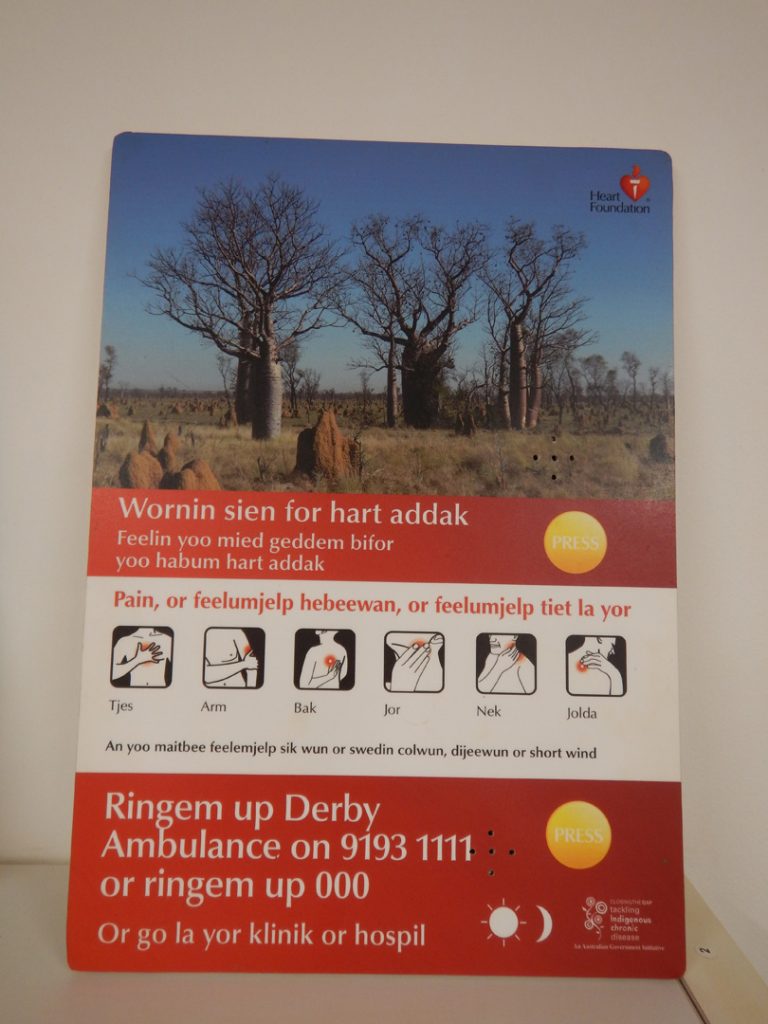 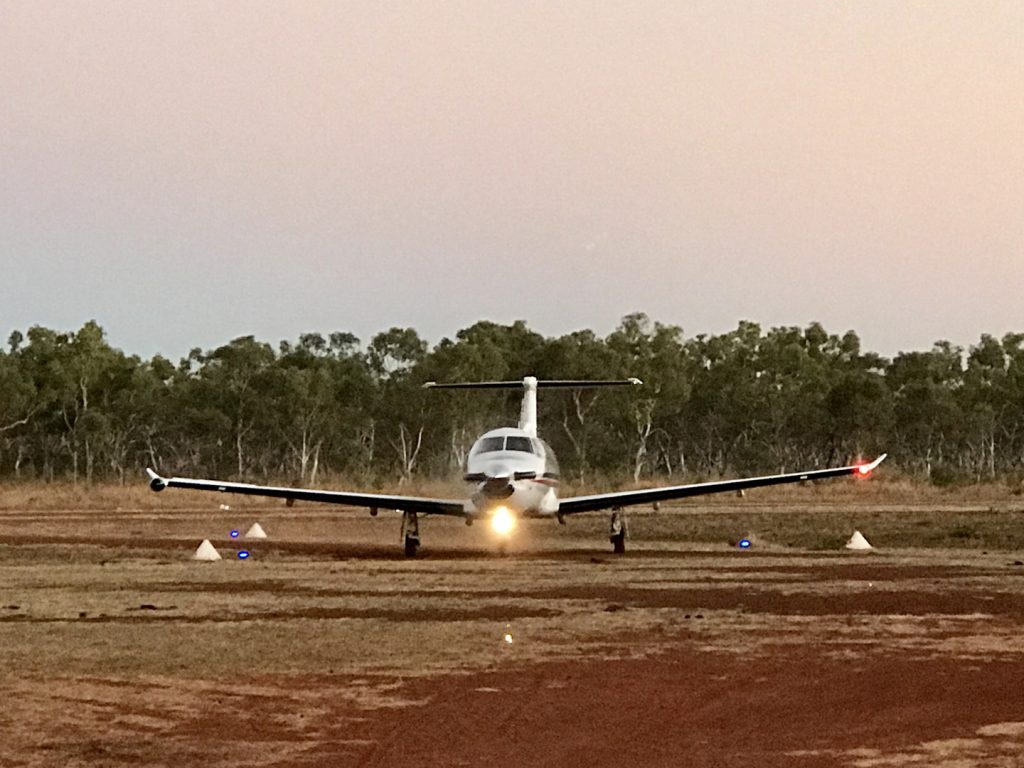 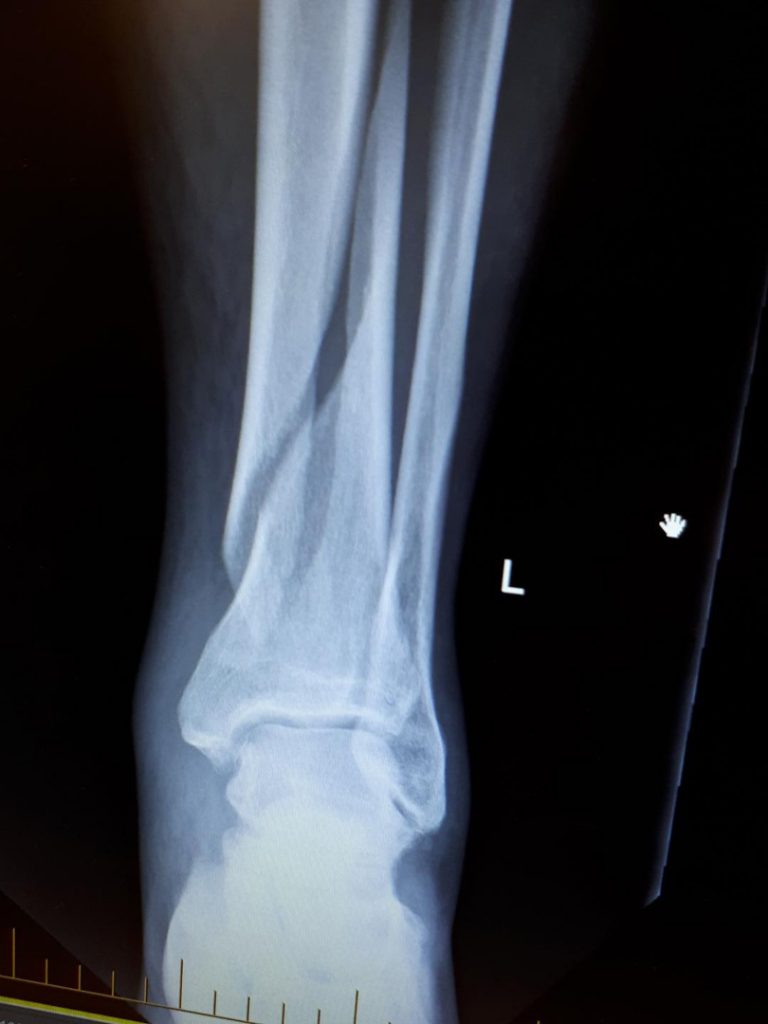 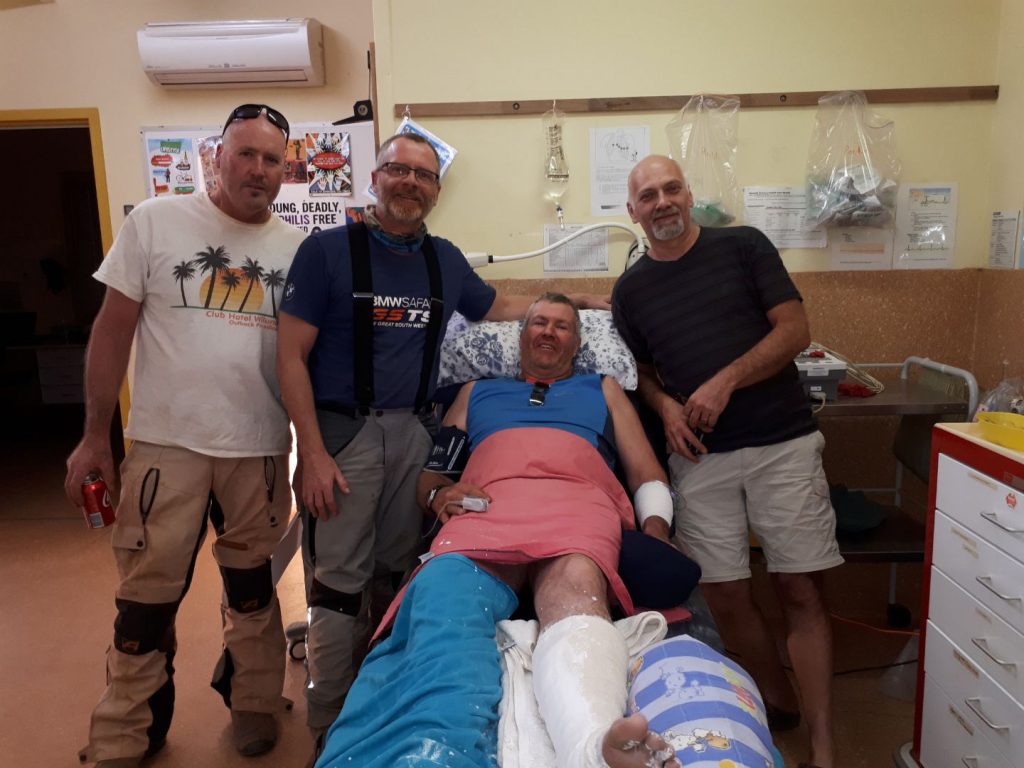 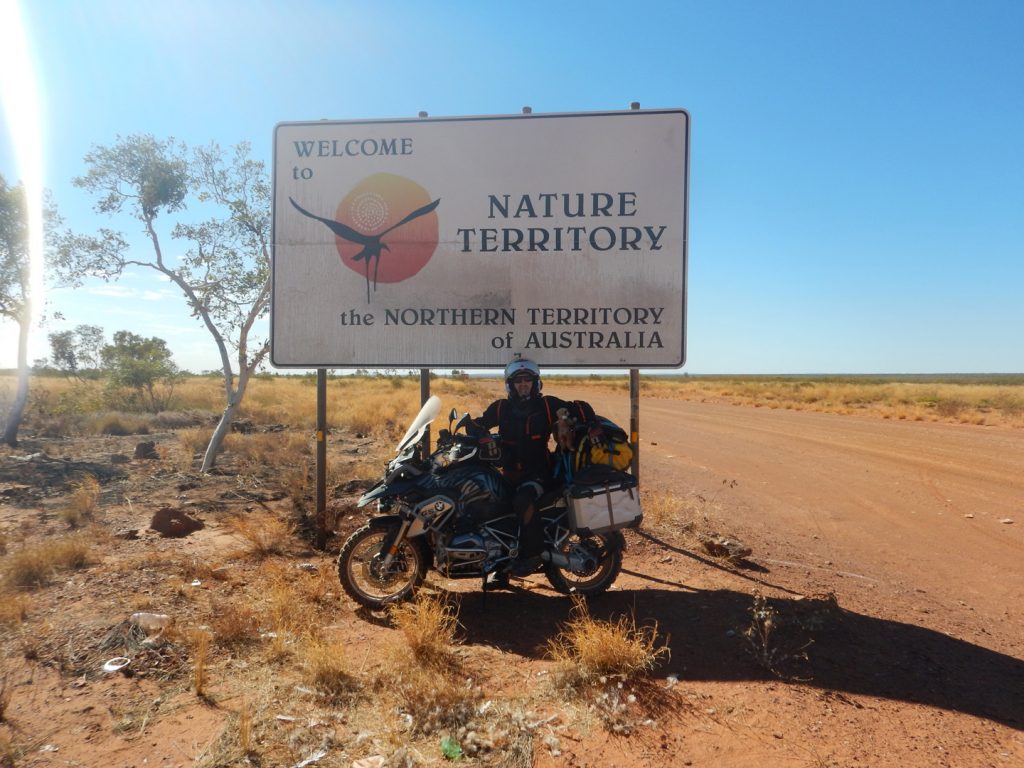 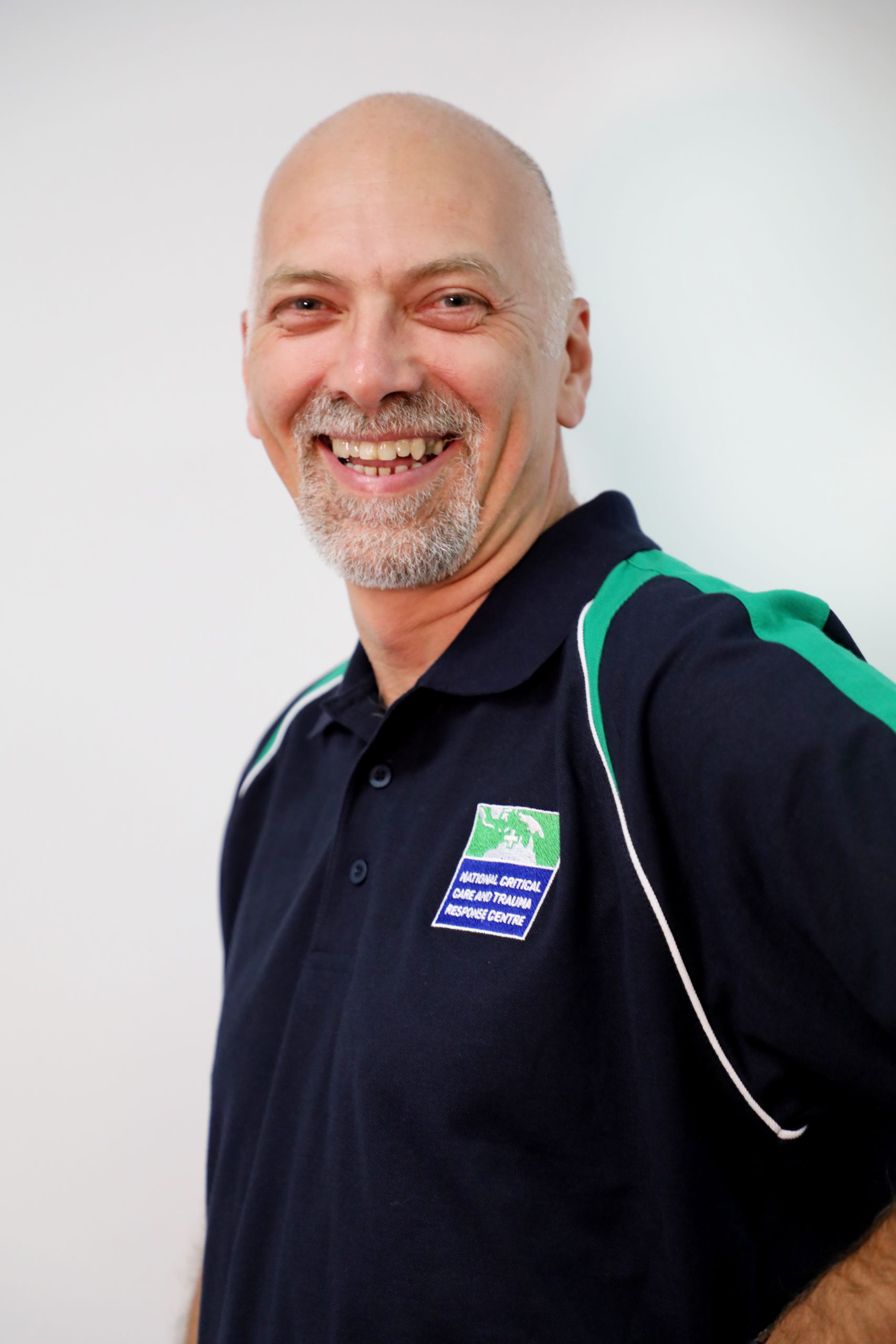 Born in Transylvania, Tudor spent the initial part of his career working within general surgery, progressing to emergency medicine in 1999. His casual interest in disaster medicine became passion, graduating with a Masters in Disaster Medicine in 2005 (Italy and Belgium), and PhD in 2018 (WA).Visiting Professor of DM, Faculty of the European Master of Disaster Medicine - Free University of Brussels (Belgium) and University of Novara (Italia), and also at the University of Medicine Cluj (Romania). Tudor is a MIMMS coordinator in Western Australia, a valued AUSMAT faculty member, an AUSMAT Clinical Team Leader, EMERGOTRAIN senior instructor, and was directly involved with the WHO Verification of the Australian EMT2 field hospital capability in 2016. Medical Team Leader during the CHOGM 2011 in Perth. Tudor has been the AUSMAT Clinical Team Lead during deployments to Timor-Leste, Japan (Diamond Princess) and during management of the Howard Springs quarantine facility (NT). In addition, Tudor is also WAMAT Divisional Commander and Medical Adviser to the WA State Health Incident Coordination Centre for the COVID-19 response. Mission Lead to the COVID-19 outbreaks on vessels in WA and Cyclone Seroja. Currently, Incident Controller at the WA State Health Incident Coordination Centre
Back to News