Samoa measles response in retrospect: lessons that prepared AUSMAT for the COVID-19 pandemic

When the COVID-19 pandemic arrived, AUSMAT had just completed its longest and most emotionally taxing deployment in response to an infectious disease. In October 2019, an unprecedented epidemic of measles gripped Samoa, resulting in 83 deaths over three months, most of whom were infants and young children.

The Australian High Commission received formal request for assistance from the Government of Samoa in early November 2019. In response, AUSMAT deployed five teams, comprising of 112 personnel over a three month period stationed at Tupua Tamasese Meaole (TTM) Hospital in Apia. The teams assisted in a door-to-door vaccination service, and maintained critical services to support the Samoan Ministry of Health during the deadly outbreak. 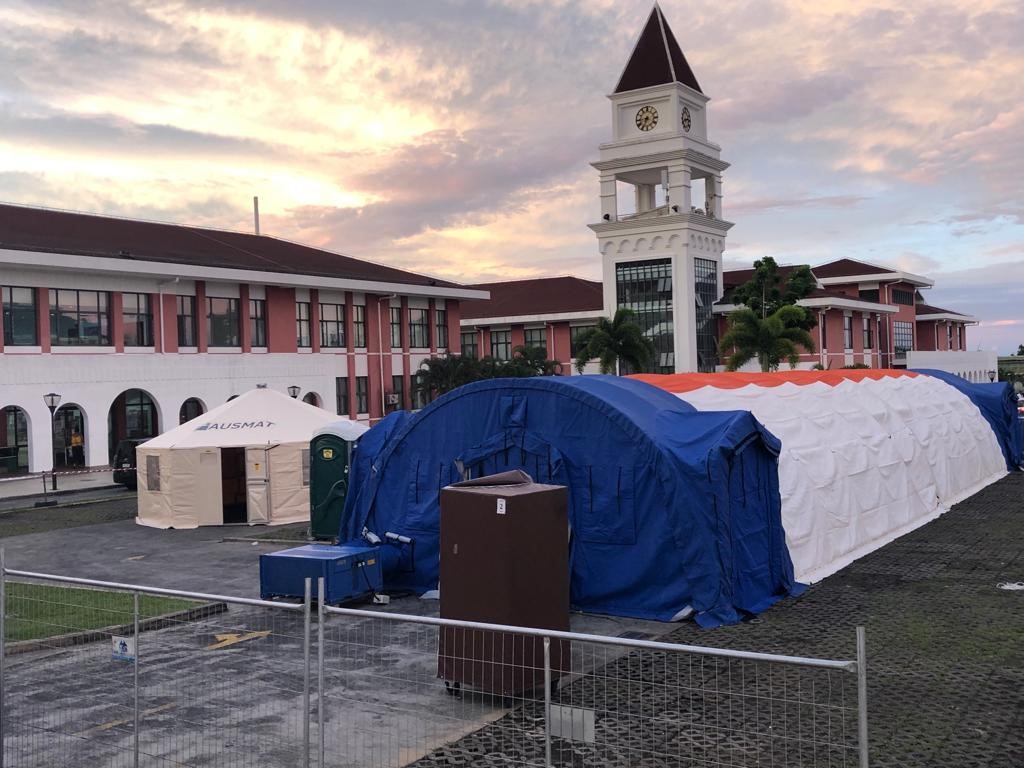 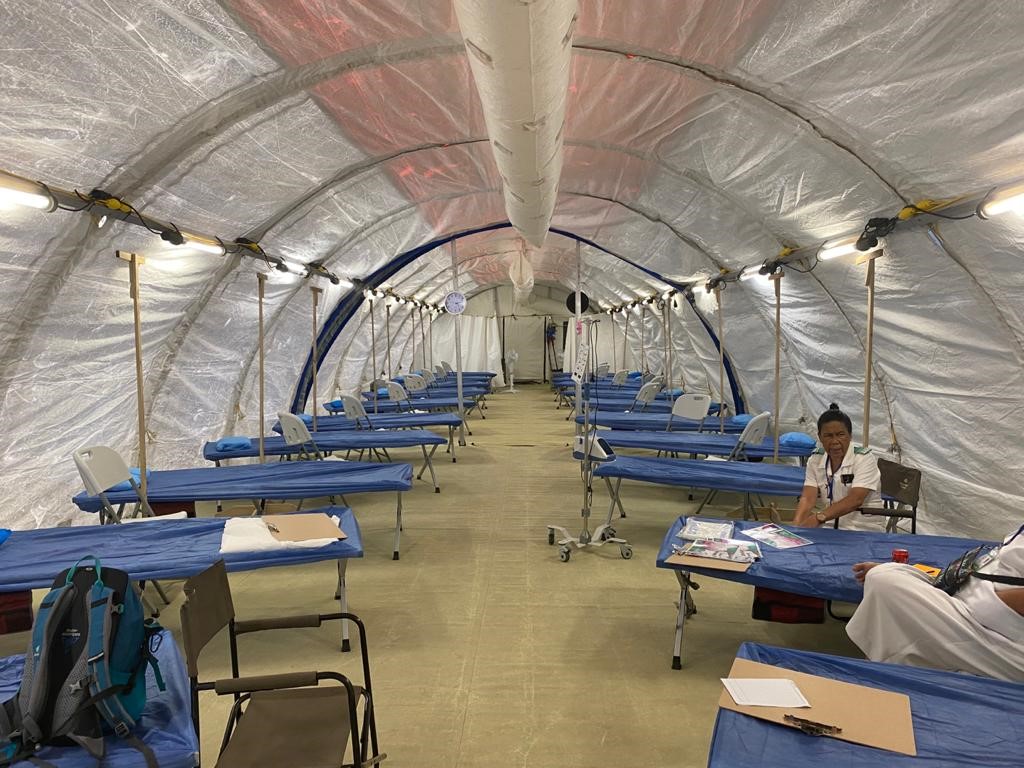 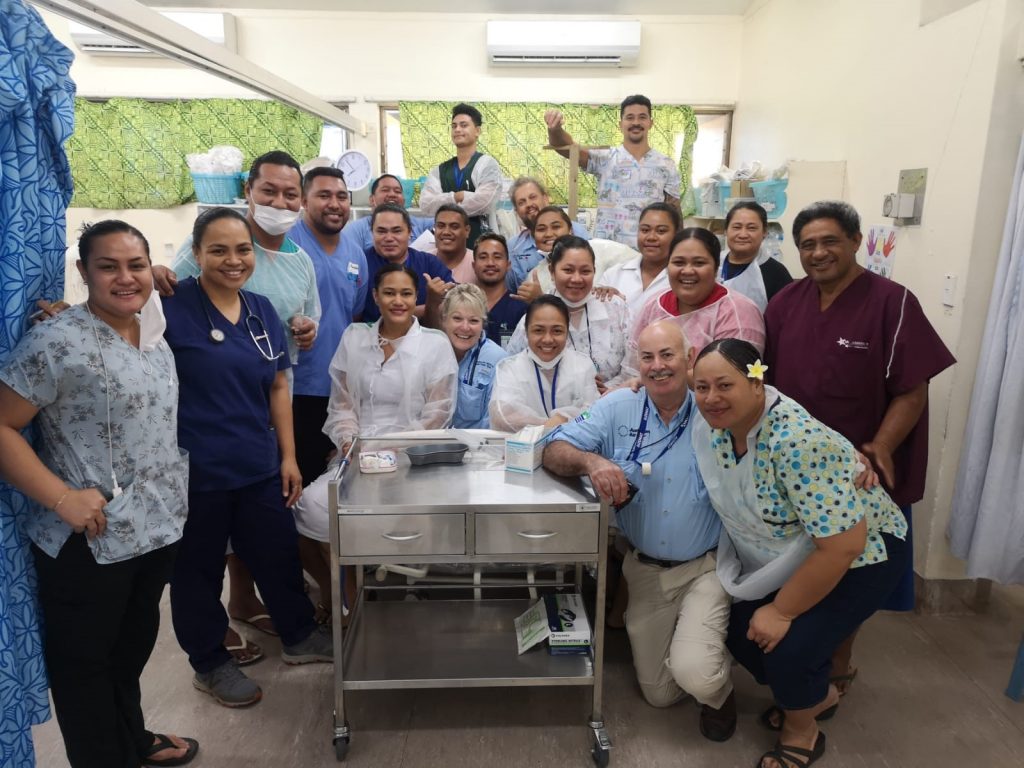 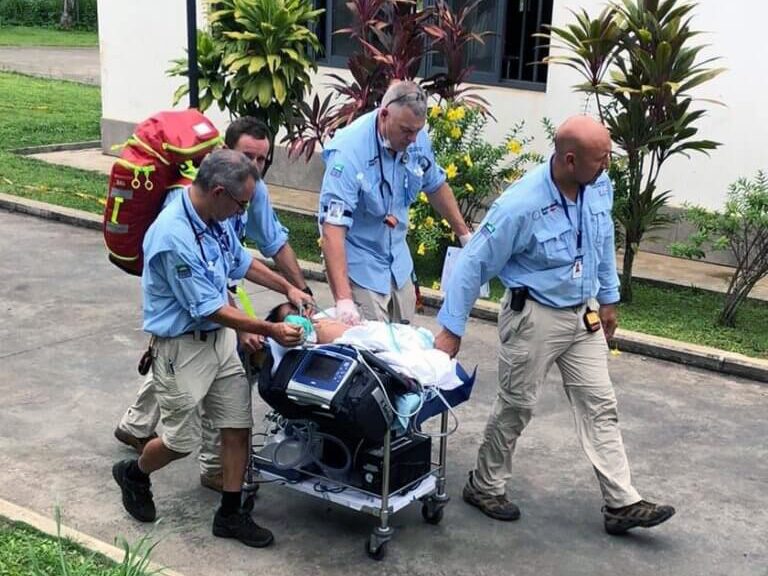 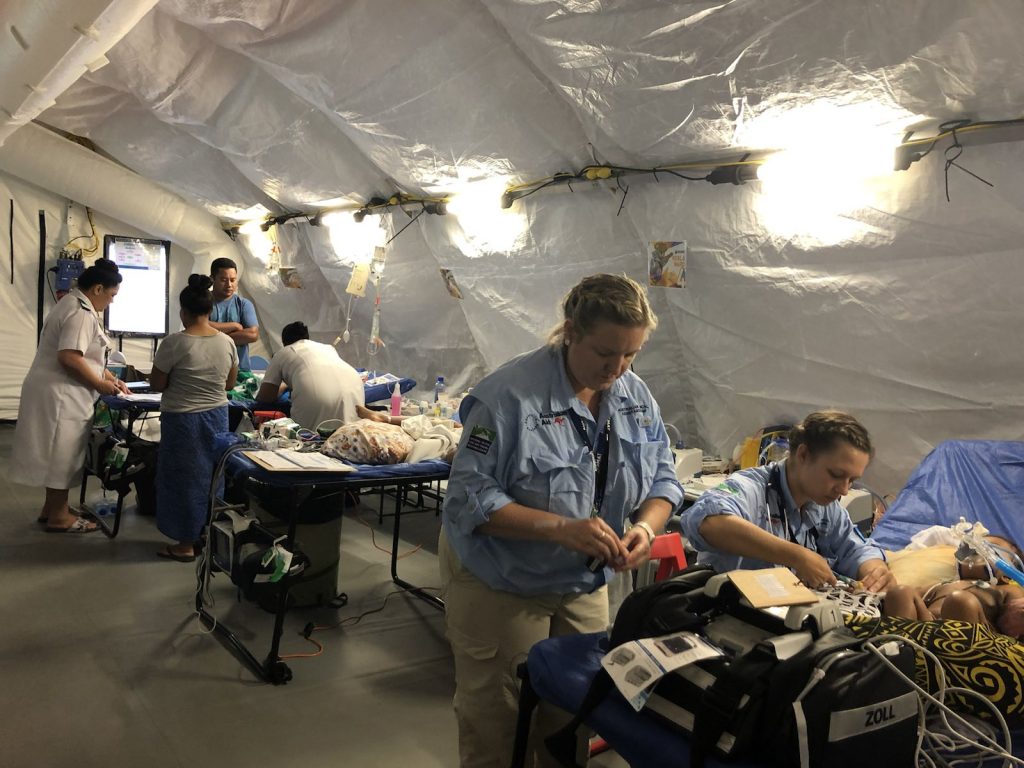 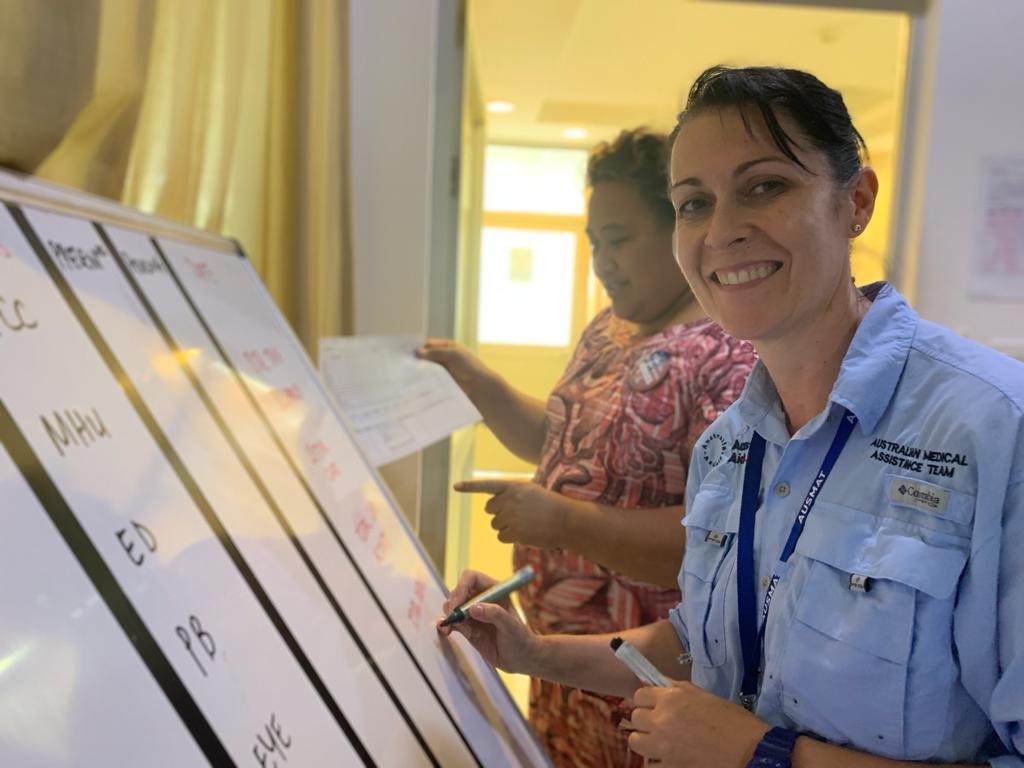 “In retrospect, the Samoa deployment was a good precursor into what a response might look like in the event of a pandemic… of course at that point we didn’t know what was around the corner.

This was the biggest activation of Emergency Medical Teams (EMTs) in our region since Typhoon Haiyan in the Philippines, 2013. Approximately 18 international EMTs responded and550 international health workers assisted and supported the Samoan health system.

From a clinical perspective, the scale of cases was unprecedented… though the deployment overall demonstrated to me how resilient we are as clinicians, particularly our Samoan counterparts.

Almost three years to the day the measles response began. I have just recently returned from Samoa’s national Emergency Medical Team (EMT) training, it’s perhaps the first time our Samoan health colleagues have come together and addressed lessons learned from the measles outbreak which lead into COVID-19 response.

The way in which the Samoan health workforce have endured and evolved since the measles response is remarkable, and a real testament to their grace, humility and resilience through an incredibly tragic and challenging set of circumstances.

The measles outbreak was a wake-up call not only in the Pacific, but also for EMTs generally.

Beyond the efforts of health care workers, the community supported the public health response and I think this corresponded through COVID-19 response too. AUSMAT provided remote support to Samoa during the COVID-19 pandemic, but as a nation I feel they were prepared and proactive in their COVID-19 response as a result of the measles response.

I feel really proud, but also really privileged, to have contributed to the AUSMAT measles response in Samoa. It was a very difficult deployment, but to see the resilience of our colleagues and be able to instigate systems which now have a legacy and will only further progress is really quite remarkable. It's a credit to the people of Samoa and the healthcare workers who have given a lot over the past three years, and who continue to give their all to their community to be prepare them for whatever lies ahead.

“Samoa was a relentless mission, there were no days off and our logisticians worked around the clock ensuring the infrastructure and field hospital were operational 24 hours a day.

Despite the difficult and undeniably emotional situation AUSMAT clinicians were responding to, we had to go in with a plan, focus on the job at hand and support the medical team as best as we could. We couldn’t allow the personal or emotional parts of the mission to impact our work.

Once on the ground in Apia, Samoa, we recognised the Bravo team would experience an increase in workload and likely an increase in patients. From a logistics perspective, this meant we had to ramp up core support, installing an acute and secondary care unit. We were also mindful that our role was to support the intensive care unit, which at that time was overflowing and oxygen was in demand with dwindling supply.

For me personally, the Samoa deployment highlighted the need for additional support regarding oxygen, particularly in an under resourced setting with compounding and competing demands.

From the perspective of the COVID-19 pandemic which commenced only a few months after we had exited Samoa, I feel this deployment taught our AUSMAT personnel how to respond to a disaster in a more methodical way. It allowed us to implement new procedures which were then streamlined by the time we were responding to COVID-19 outbreaks and establishing quarantine facilities.

The measles response in Samoa kept us on our toes and enabled us as a team to step up our awareness and synchronise our work patterns to best support each other, which was incredibly beneficial when we started applying ourselves to COVID-19 response over the coming years.” 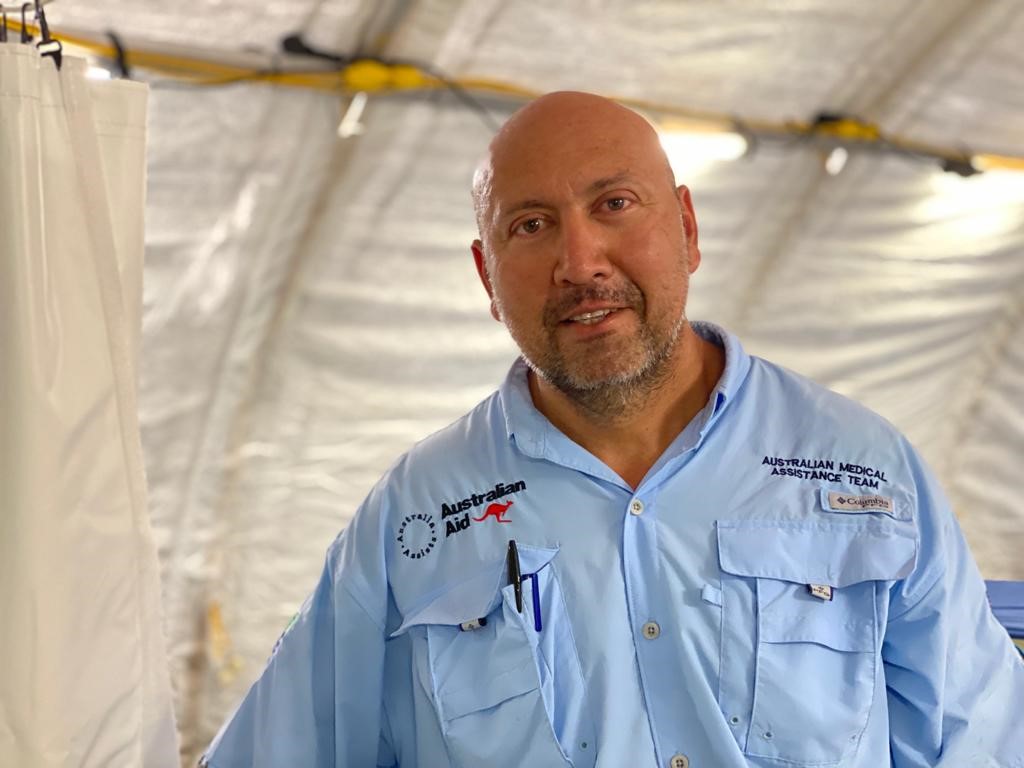 “This was the hardest deployment I have been a part of, especially as a clinical team lead. It was incredibly challenging and emotional, my son was about three at the time… and I witnessed so many infant deaths so perhaps it struck home in a different way for me.

In some ways, each deployment has an entirely different profile and composition, but I think Samoa was definitive for AUSMAT in how we consistently and professionally respond and epitomised that goal we have as a team to work alongside the local health teams.

From a COVID-19 perspective, especially looking back now, I think the Samoa measles response prepared AUSMAT on how to respond to a rapidly evolving situation in terms of a communicable disease rather than a physical, sudden-onset disaster.

When the Pandemic began, we had to process information and stay ahead of the 8 ball at all times – I think the Samoa deployment prepared us for this and allowed us to have systems and practises already in place that allowed us to respond at the same pace as incoming information.

This event highlighted the importance of a multi-disciplinary team, with practitioners from public health, critical care, and a backbone of logistics, who all worked toward the same outcome. Suddenly we revaluated the critical need and importance of introducing public health into our missions looking forward.

Public Health is at the forefront of all our minds now, we have to be cognoscente of public health in every response, Samoa highlighted this and again prepared us for response and amplified our capability over the coming years.

The Samoa deployment seriously highlighted the philosophy and purpose of AUSMAT. It was a huge effort and still sits with me as one of the most important things I have ever been a part of.”

Shortly after the mission to Samoa ended, AUSMAT responded to the 2019-2020 bushfires ravaging much of Victoria and New South Wales, and COVID-19 repatriation flights to the Howard Springs Quarantine Facility in Darwin began shortly thereafter.

Since the beginning of 2020, AUSMAT has responded to 21 COVID-19 related deployments both domestically and across the Asia Pacific region, with lessons from Samoa demonstrating the need to focus on public health in deployment. 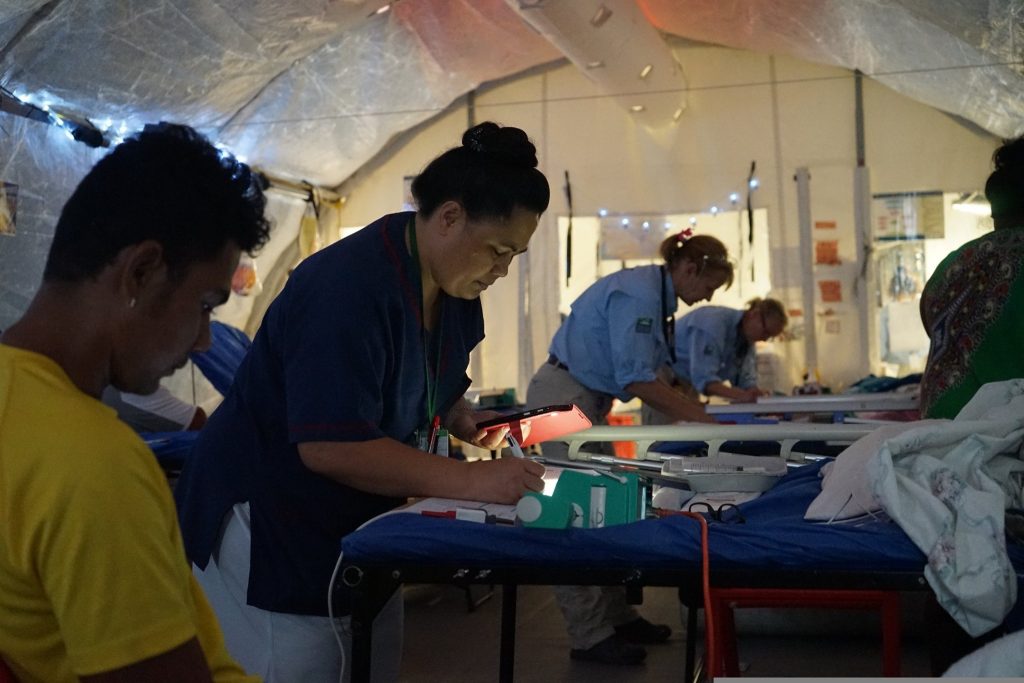